Ban reason: Killed the entire crew as a pyro slime on lowpop. Didn't initially see anything wrong with this. Reread the rules and be considerate of other players when playing an antag.

Your side of the story:
I'd like to start by saying I agreed with Sectoid Dan from the beginning; removing people from the round is typically a dick move. It's also the ONLY move you can typically make as a Pyroclastic Anomaly Slime. A midround event spawns an inferno of fire, an antagonist slime pops out, they're given no particular message beyond "You can now vent crawl!". Clicking the wiki link provided by a server brings you to a page where you're told to Survive, Consume, and Replicate. You have no common language with the crew, can't interact with objects, can't drag objects. and have a hunger stat that lowers if you aren't feeding. The base kit is entirely revolved around killing.

I played the roll exactly as the server claimed I should. Hunted a few pets and crew, replicated a few times, survived to the end of the round. Only problem is, I wasn't immediately melted by fire extinguishers and ran out of mobs to feed on. Sectoid Dan put down a ban for murderbone, and were this any other antagonist I'd agree with it 100%.

(As an aside, I've got the round logs saved. Thought I was being rather polite in conversation with Sectoid Dan but I can let someone else be the judge.)


Why you think you should be unbanned:

Pyroclastic Anomaly Slime is a Murderbone Antag by design!
>Typing 'Slime' into the server's Wiki button brings you to a page with Sentient Slime's objectives. Survive. Consume. Replicate.
>This page also confirms Pyroclastic Anomaly Slime as an Antagonist role. Specifically called out as the ONLY antagonist slime.
>Antagonist policy states to (6. Do your objectives) and (2. Don't be friendly unless you're doing your objectives). The objective in this case being to feed on mobs.
>Unlike normal Sentient Mobs created by other events, slimes cannot drag objects or speak to crew. They ONLY have lethal actions. All you can do to 'spice the round' is attack crew.
>Server Code, Server Rules, and the Server's choice of wiki mark Pyro Anomaly Slimes as an Antagonist, with an explicit objective to feed on mobs. That's what the role does. It's a combat role.

This wouldn't be an issue if it happened on a higher pop time; Ninja, Nightmare, Revenant, and Lone Ops usually have population checks to prevent this kind of situation from happening. When there's two active crew to feed on, one dead is 'catastrophic casualties' and two is 'full station murderbone'. The Pyro Slime shouldn't have been spawned at all.

Rather than put an antagonist ban on me for playing the role as it's defined, Pyro Slime should be blacklisted from happening on lower server populations. Or just blacklisted in general. Slimes feed on other mobs; it's their job. It's not a roleplay-viable role. Sectoid Dan suggested I could have sought out a Translator but there were no Scientists in the round to make one, nor did I have the ability to request one using slimespeech. I'd love to see a Sentient Slime role that acts more like the Sentient Animal spawn, but for now it's simply a hard-coded murder antagonist that sometimes spawns when it shouldn't.

And for the inevitable post saying there were other things I could have done to spice up the round besides working on my slime objectives... what else? The translator and moving around was all Sectoid Dan could come up with in our chat. I'd be happy to hear other examples. All other evidence seems to mark Pyro Slime as murderbone only.


EDIT: I'm having trouble uploading the Fancy Chat logs of the round; forum doesn't like .html files. Here's a screenshot of my conversation with Sectoid Dan, with the surprise mid-ahelp deathsquad attack cropped out.
Last edited by WallaceShark on Thu Sep 03, 2020 6:42 am, edited 1 time in total.
Top

Since the ban is soon to expire, I'd like this thread changed to a [Note Appea]. You can see through the provided chat logs that I was not confused about why murderboning is wrong. The note left in regard to this ban is incorrect.

I got a note for killing as a Killing Antagonist. The server rules have my back on this; Pyroclastic Slime's objective is to kill and reproduce; I fulfilled my objectives. There should be no note for this.
Top 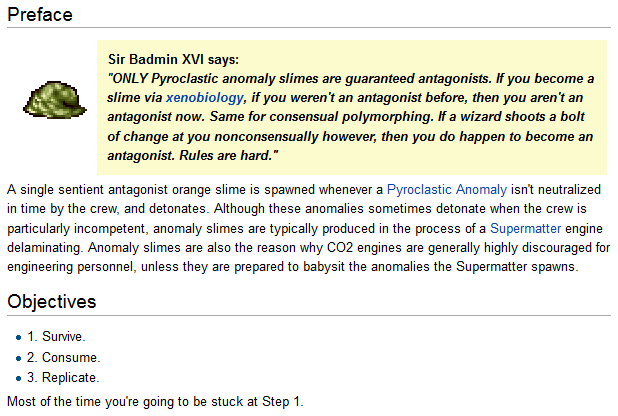 This is what you get when you type 'slime' into Citadel Server's own wiki button. It's also the ONLY instructions you get, as Pyroclastic Slime has no other objective text saying otherwise.

They are antagonists with a killing objective. It's that simple.
Top

Since I just gave out another week ban for this exact same situation: you don't have objectives. Objectives are the message you get when you spawn in. You have none. The wiki is not your source on objectives, the game is.
Top

Now I don't mean to be a thorn about this, but that's the first I heard about Pyroclastic Slime not being an antagonist. The server uses a wiki that says one thing with nothing else in-game and on the Citadel Rules Page disagreeing with it. They are also meant as an antagonist in the original codebase that added Pyroclastic Slimes. How is anyone supposed to know it's the opposite here if there's nothing indicating it?

Perhaps a note could be added to the rules stating that Pyro Slimes aren't an antagonist on this server? Or the Pyro Slime could be coded in with jobtext like other ghost roles. Because this is a completely different stance from other codebases with Pyroclastic Slimes and it seems the mistake has been made multiple times by multiple players.

I still followed all published rules during this incident; could the note be adjusted to a warning instead?


Ashwalkers had a similar problem a while back. Citadel decided to make them a Peaceful antagonist when other servers had them as soft antagonist. No wording about this anywhere. The rules were adjusted for them; it should be easy enough to put in an entry for Pyro Slimes. This admin post here is the only thing within the game suggesting Pyro Slimes aren't meant as an antag here.
Top

It's been several months since anything was done about this, going to move it to denied. However, in the future, and as always, you should ahelp when getting a ghost role without objectives to clarify what is and isn't acceptable. We do have lavaland policies, at the bottom of our rules page. And "could the note be adjusted to a warning" , notes are warnings. They're records of behavior, and double as warnings. Sorry it took so long to finish this.
Top
Locked
7 posts • Page 1 of 1

Users browsing this forum: No registered users and 0 guests