Reason for complaint:
After an interesting round as an IAA I go to joke about how the warden and a junior officer told me to "shut up" after I was explaining that xenochimeras could go feral from being hurt, stressed, or upset (which I realize now the last one isn't true, that's my bad!)

A few moments later, my sole task on the citadel discord complete I come back to an absolute text wall of a ping by one of your own admins.

I don't really know how much emotion I can put in this complaint but needless to say it made my heartbeat spike. Like, you come out the gate attacking me (by the way, unless anything's changed since last month IAAs are independent from security!) then just say that I'm a child and mentally challenged for not agreeing with you? What's up with that.
Top

Like I'll be the first to say that I wasn't an absolute angel in this exchange but when someone comes out of the cage swinging of course I'm going to reply in kind, as they seemed to have little to no respect for me or what I had to say from the get go and devolved to slinging insults about my age and intelligence when I so much as talked back to them.
Top

I'm not going to spend all that much time writing up a reply, as I just want to share a bit more of the chat for context reasons. There was quite a bit left out. 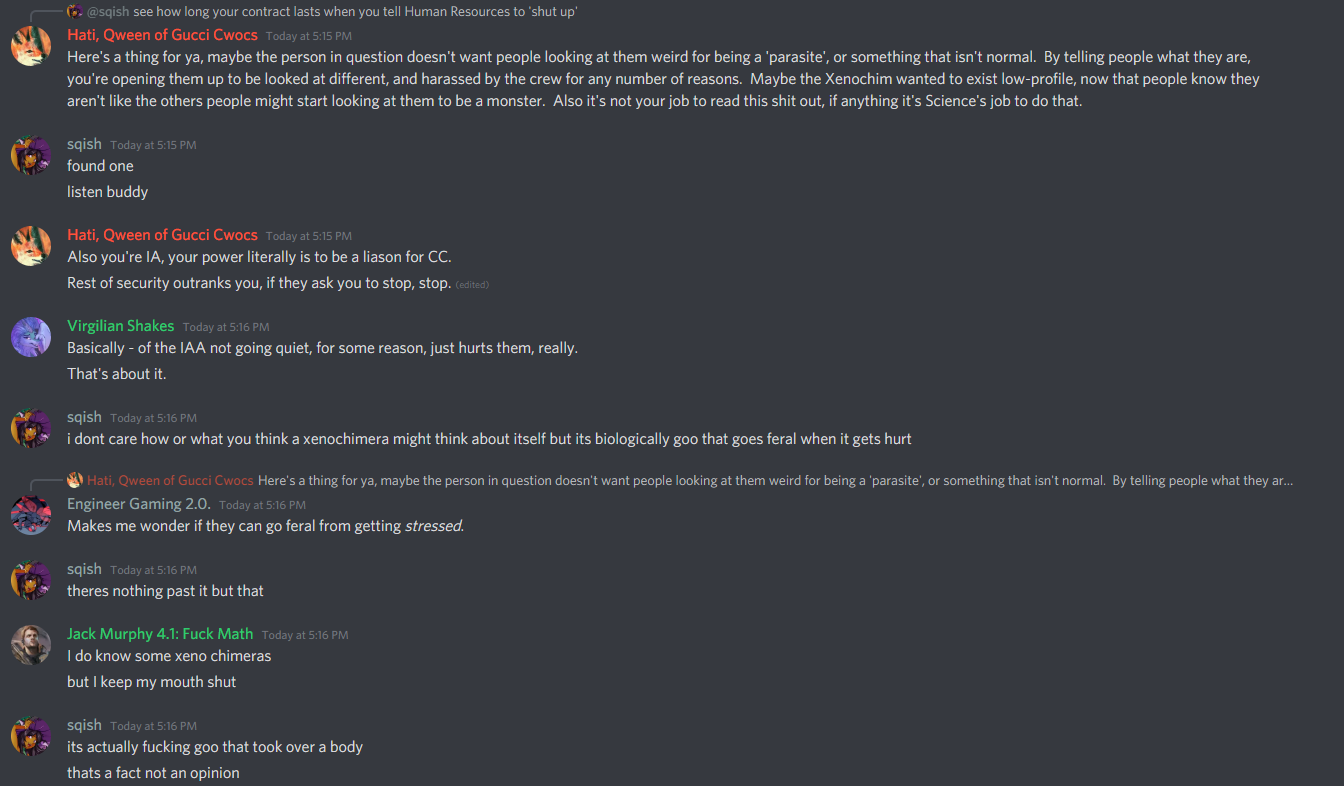 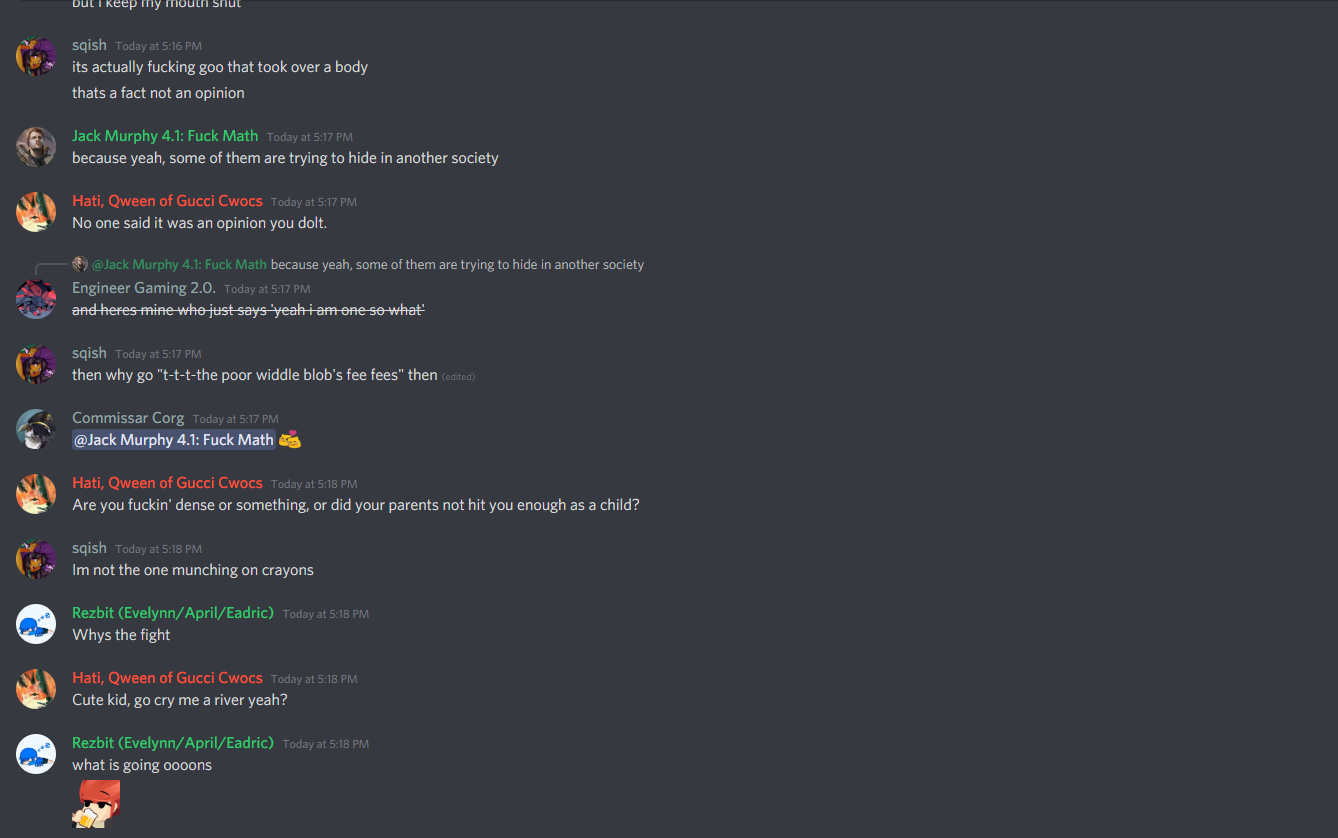 That was the last time Hati replied, meanwhile sqish continued with the discussion further on. I'd also like to continue on by saying that this was not Hati's first comment. It is not as if they came in like that, you two were talking prior to that, but you've decided to leave more context out. 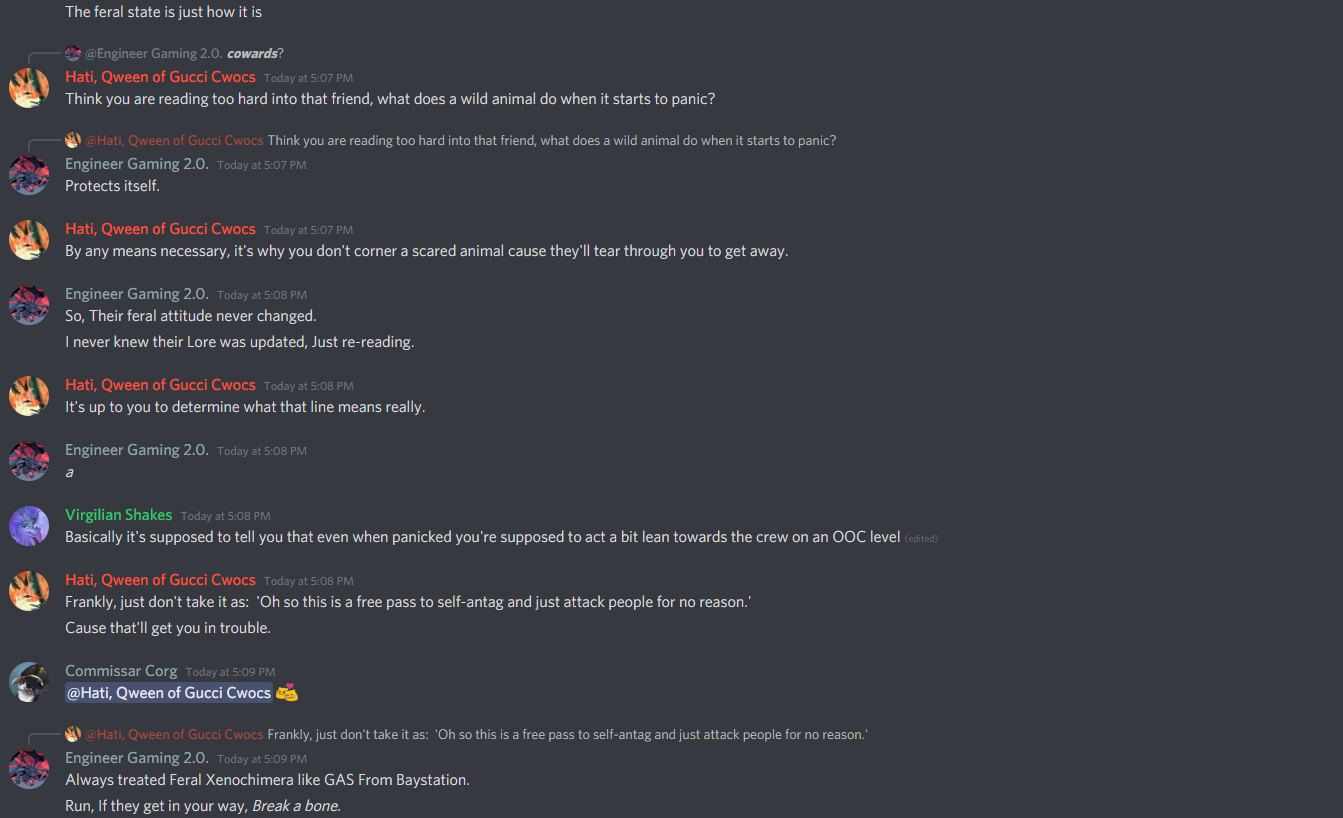 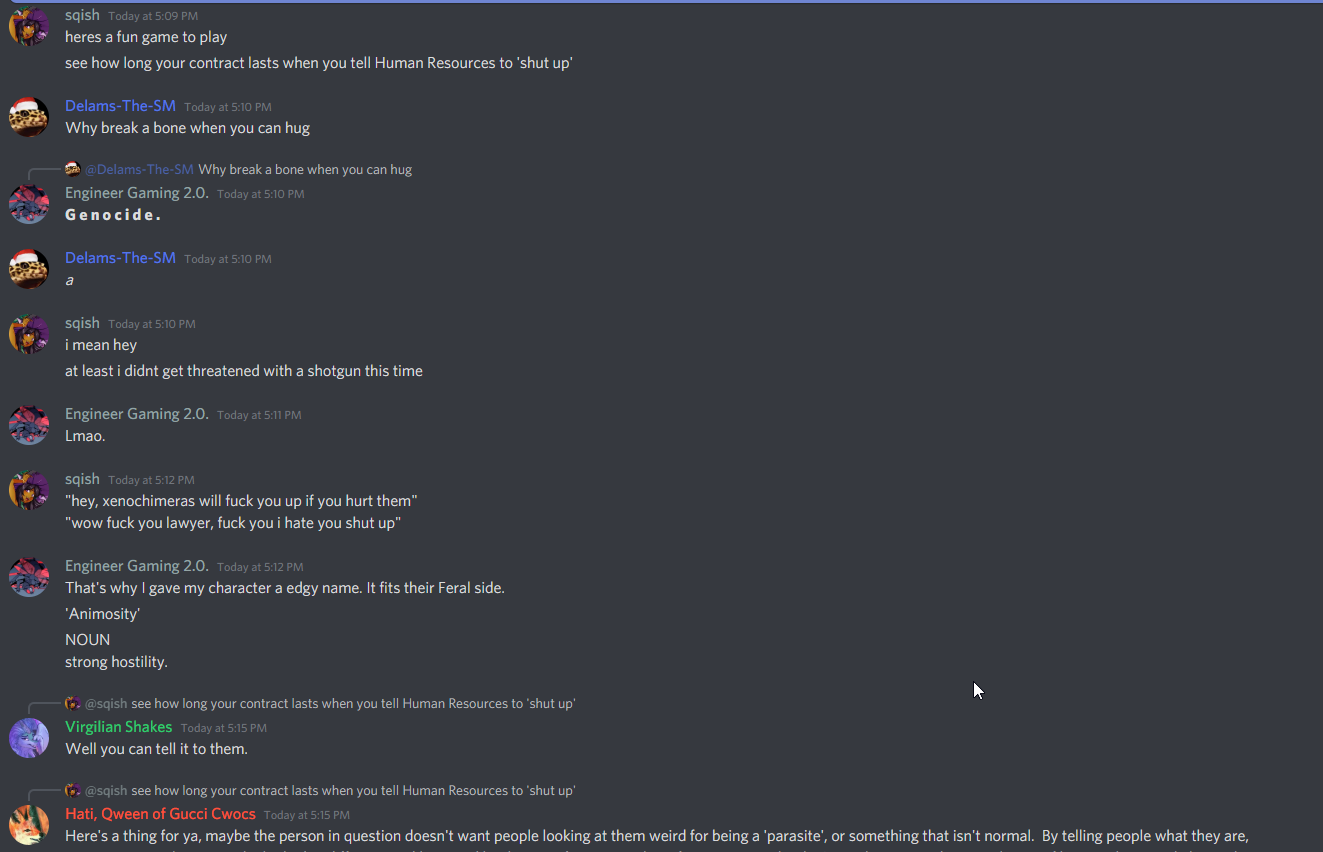 And as you can see, it was not just an immediate jump as you have heavily implied it was. Excluding important context like this is not a good look whatsoever. I don't really have an opinion on the situation as I was not present when it happened, but I hope this provides context to other viewers, and the administrators responding to the complaint.
Top

I continued the discussion yeah, but it was much tamer, discussing how not to make a xenochimera turn into a simplemob and their lore since i didnt know citadel had their own.
It was a much tamer, more satisfying conversation with someone who didn't immediately jump on me to provide incorrect information an on-station job and assumptions about a character that was not his, and instead provided a helpful link to the citadel lore article so I could learn up.

I didn't imply any heavy jump, I said I salted in citcord (without scrolling up may I add, I just posted then moved to a different server) and an admin textwalled me, which was what happened. We butted heads and he escalated by insinuating that I was dropped on the head as a baby. I replied the way I did because I just assumed that it was just a regular player I was talking with, not a full on staff member. I'm not real active in the discord and I didn't realize his role color until I looked over at the side bar; This altercation wasn't particularily beneficial to my activity on the discord server either.

Honestly I'm still not entirely sure what the arguement was stemming from and I'm still confused on that front; Were they upset at me... explaining that a xenochimera goes feral? Upset at me not following an order I wasn't obligated to respond to? Upset at me joking about what'd happen if you insulting management? I have no clue and at this point its jumped all over the place so much that trying to solve it would be detrimental to coming to a solution here.
Top

Well
It was brought to my attention this was just.


Archived.
With no final answer.

Makes sense given that I'm going to unironically have a few processes including whitelists redone if I can't get people to post on the forums and soooorta made an angry post about it because I'm sick of relying on the answers of literal non players but.
Not this time.

The tl;dr is.
I did "discuss" in not very friendly terms internally after seeing this because uh.
Frankly.
I don't care how potentially rude players are. If you're an admin, don't be the person making everyone here look bad.
Power and responsibility. If you're in a position to be doling out punishments and enforcing the rules, you don't get to strike back with low blows and full on toxicity and turn the discord into a dumpster fire because someone made you upset.

There's been numerous cases of this in the coming months, and there's been a declaration from me in staffchat

and wow is it hilarious this went on for so long (four, five months?) that I had to do this about 3 weeks ago.

I'll fully take responsibility for not having this finalized sooner. I don't want to be the sole person dealing with these things but here we are.
There won't be a next time where I'm just wishy-washy about it.
Everyone's been warned. I hope no one forces it out of me.
Top
Locked
5 posts • Page 1 of 1

Users browsing this forum: No registered users and 2 guests